They are an organic compound characterized by having a carbonyl functional group. When the carbonyl functional group is the most important in said organic compound, ketones are named by adding the suffix -one which come hydrocarbon (hexane, hexanone, heptane, heptanone, etc). you can name are also putting off ketone radical to which is attached (eg methylphenyl ketone). When the carbonyl group is not the priority group, the prefix oxo- (2-oxopropanal example) it is used. 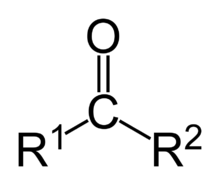 Ketones infrared absorption band present between 1,670 and 1,730 cm-1, due to the stretching vibration of the carbon - oxygen. Ultraviolet absorption there is also a weak between 2600 and 3000 A. In the NMR spectroscopy can distinguish the aldehyde function of the ketone function by their different chemical shift spectrum.

The ketone has a reaction characteristics with 2,4-dinitrophenylhydrazine to give the corresponding hydrazones red- constituting an orange precipitate, which allows to demonstrate their presence.

The cyclic ketones of the present invention encourage the production of blood platelets, leukocytes and erythrocytes, and can be used in the prevention or treatment of cytopenia caused by chemotherapy, radiotherapy or drug therapy of cancer, or by immunological abnormality, anemia and the like.

Representative ketones, from left: acetone, a common solvent; oxaloacetate, an intermediate in the metabolism of sugars; acetylacetone in its (mono) enol form (the enol highlighted in blue); cyclohexanone, nylon precursor; Muscone, an animal smell, and tetracycline, an antibiotic.